A recent find regarding Thomas Connors (O’Connor) is from a Canadian Government Return by the Canadian Immigration Service which recorded the arrival of passengers sailing from Liverpool on the S.S. Franconia on the 11th August 1928 and arriving at Halifax on the 18th. The name and address that Thomas gave for his nearest relative (his mother Kate O’Connor of 5 Morrisons Rd, Clonmel) matches that from other documents I have and confirms my uncle’s account of his father Thomas seeking work in Canada as part of a government sponsored scheme.

All the passengers listed on the page were going to work in farming, although only one of the thirty was already a farmer, the majority being either labourers or miners. Their destination was given as c/o C.N.R. Winnipeg, Manitoba which I presume refers to the Canadian National Railway. Thomas was one of the so-called Harvesters which is confirmed by a related document, the Franconia’s passenger list, which specifically describes the passengers as Harvesters.

Thomas’ place of residence was given as 16 Nelson St, Widnes and interestingly, many of the other men on that page were also from Widnes or the surrounding area. The Harvester Scheme, with passage sponsored by the Empire Settlement Act of 1922, was intended to encourage mainly British workers to the Prairies to assist with the harvest in the hope that many would settle there permanently. My uncle told me that the workers were enticed by the promise of good wages, food and accommodation but when they arrived they found the reality to be somewhat different. Thomas spent several months wandering around Canada trying to find work before returning to England disillusioned, returning on the ship Letitia departing Montreal and arriving in Liverpool on the 25th Nov 1928. 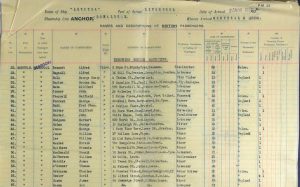 He and the other passengers were listed as “Returning British Harvesters” and his address matches that given on the outward passenger list. I have read other accounts claiming of the exploitation of the Harvesters, where they were told that they would have to accept reduced wages because they were novices with no farming experience. The settlement programs failed to attract the predicted number of British immigrants and following the Great Depression of 1929, the programs of assisted settlement came to an end.