Although he was known as Thomas O’CONNOR, my mother’s father was actually born Thomas CONNORS in Heywood Rd, Clonmel, Tipperary, Ireland in 1901. From his birth certificate, we know that his father was William CONNORS, a labourer and his mother was Kate FAHEY.

Thomas married Mary Ann WALTON in 1930 and the certificate states that he was a widower. According to his son (my uncle), his previous wife died in a road accident. Thomas, Mary and their two children moved from Waterloo Rd to Keble Street, Widnes in 1937, where Thomas died in 1964. I have very little information about the CONNORS in Ireland, other than family anecdotes and this photograph taken in 1923: 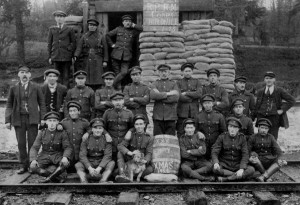 The Railway Protection, Repair and Maintenance Corps was formed to keep the railways running in response to the destruction of rails, bridges and stock both before and during the Irish Civil War in 1922. Birdhill appears to be one of many fortified posts set up along the lines.

My uncle has told me that at some time between 1923 and 1930, his father Thomas and his brothers (“Matty” and “Willie”) came from Ireland to England, though he believes that at some time during this period, Thomas went to Canada as part of a government-sponsored work scheme. I subsequently discovered Thomas’ name on a Canadian Immigration document dated 1928, confirming that Thomas did indeed travel to Canada as one of the many “Harvesters” who were encouraged to work in the Praries on the Canadian harvest on the promise of good wages and in the hope that they might settle there permanently.

I have also found the passenger lists for Thomas’ outward and return journeys. Both documents confirm that Thomas was travelling as part of the British Harvester Scheme and they both list his residence as 16 Nelson Street, Widnes. According to my uncle, Thomas was not happy with the conditions or the way the Harvesters were treated so spent several months trying to find other work before returning later the same year.

Thomas, Matty and Willie had a sister, Mary, who remained in Ireland (Waterford) and married a Joseph BURKE. According to her death certificate, Mary died aged 78 in 1986 (hence she was born c. 1906) and she was the widow of a farm labourer. Her address was 5 Morrissons Road, Waterford.

As for Thomas’ brothers, I have an obituary notice from the Widnes Weekly News reporting the funeral of William O’CONNOR who died at the age of 76 in 1974 and a copy of his death certificate, which gives the date and place of his birth as 16th June about 1898 in Waterford, Ireland. The informant was his son, Thomas O’CONNOR.

The records of Widnes Cemetery list the burial of Annie O’CONNOR of 20 Major Cross Street – the same address as that given for William (above). She was 77 years old and died on the 9 Sep 1970. Details of William’s burial are also recorded: William died on the 25 Feb 1974 aged 75 years. Their grave is number 5099 in Section 16R

The photograph below was in my mother’s collection and due to the striking resemblance of the man to my uncle, I believe could be of Thomas CONNORS and family. It is in the form of a postcard and the reverse has the address of the studio at which it was taken, which was at the 115 Albertbridge Road branch of W. Abernethy, in Belfast. Unfortunately, there is no date on the photograph to help me determine whether this is his first wife or not. 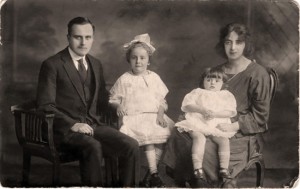