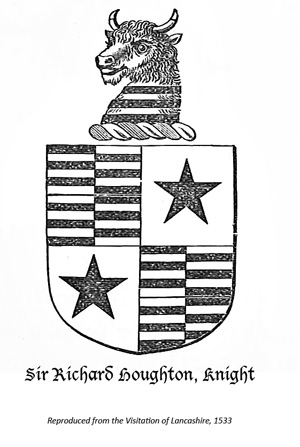 The H(o)ughton surname has been found throughout Lancashire for centuries and is said to be one of the most ancient in England. Hoghton Tower, the ancestral home of the de Hoghtons, is a fortified manor house situated between Preston and Blackburn in Lancashire.

The famous knighting of a loin of beef by King James I is said to have taken place at Hoghton Tower and some scholars believe that William Shakespeare was employed here as a teacher during his ‘lost years’.

According to the Hoghton Tower website, the de Hoghtons are descended from Harvey de Walter, a companion of William the Conqueror.

Below is a copy of a pedigree published in Volume 88 of the Record Society of Lancashire and Cheshire, “A Calendar of the Deeds and Papers in the possesion of Sir James de Hoghton, Bart, of Hoghton Tower, Lancashire” by J H Lumby (1936): 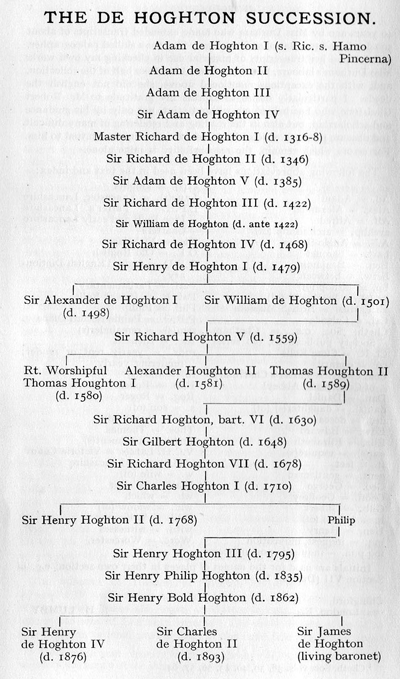 During the 16th and 17th centuries heralds visited the counties to establish families pedigrees and their right to bear arms. This happened on four occasions in Lancashire. The Chetham Society published these in several volumes, which are now out of print and out of copyright. For those with an interest in the early H(o)ughton pedigrees (and those of the other noble families of Lancashire), I have scanned the relevant volumes and saved them as fully searchable and printable PDFs.

The first volume of the Chetham Miscellanies, published in 1851, has a chapter listing the families who entered pedigrees for the four Visitations and is a useful starting point for those interested. The extract can be downloaded as a PDF (~ 12 MB).

For the completists, the published volumes of the four Visitations can be downloaded below:

Please note that these are fairly large files (30-50 MB each – it may be as well to download and save them before viewing!)

It should be noted that the information given to the heralds might not have been accurate, especially if no documentary evidence was forthcoming to support the oral tradition!

For those keen to go even further back than the Visitations, in 1937 the Chetham Society also published “The Knights of the Shire for the County Palataine of Lancashire (1377 – 1460)”. This volume includes biographies of Richard de Hoghton and Henry de Hoghton and I have reproduced this as a PDF for download but please note, this is a very large file weighing in at over 120 MB!

2 thoughts on “The Ho(u)ghtons of Hoghton Tower”