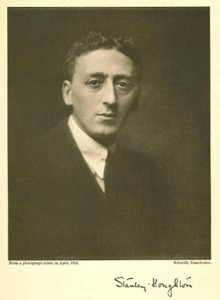 His best known work, Hindle Wakes was, for time it was written in 1910, a controversial portrayal of Lancashire life which examined the fallout from a young working-class mill girl’s fling with the mill owner’s son.

Harold Brighouse wrote an introduction to “The Works of Stanley Houghton” (Volume I by Constable, 1914) which serves as a useful mini biography – I have reproduced this as a PDF document (12 MB).

Below are the details of his family I have found through the censuses:

In the 1901 census, William Stanley HOUGHTON and his youger sister Ellen are with their parents in Withington, Manchester:

Ten years earlier, the above family were in Knutsford, Cheshire:

Prior to that, in 1881, John, Lucy and son Stanley were in Ashton upon Mersey:

I have found the marriage of John Hartley HOUGHTON to Lucy Mary DARBYSHIRE in 1880; John’s father is W. C. HOUGHTON, merchant and Mary’s father is Samuel DARBYSHIRE, no profession given.

In the 1871 census, in Ashton upon Mersey, there is a J. H. HOUGHTON who is the son of William C. HOUGHTON and his wife Alice:

Wiiliam and Alice HOUGHTON are in Stretford in 1861, with their sons George and John:

The National Probate Calendar (Index of Wills and Administrations) records the following:

The Gravestones Photographic Resource website has the transcription and two photographs of the headstone of William Chadwick HOUGHTON and his wife Alice; they were buried in Brookland cemetery in Sale, Cheshire.

One of the photographs is reproduced below (please note that copyright belongs to the original photographer – the photograph may not be used for commercial purposes). 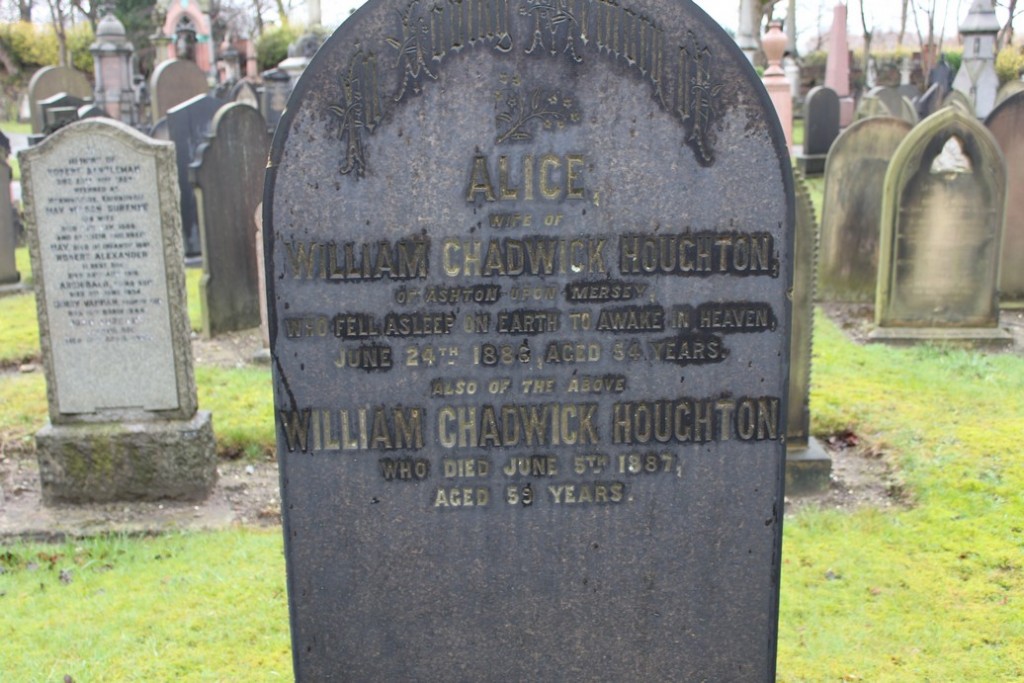 The headstone has the following inscription:

You can find out more about which cookies we are using or switch them off in settings.

This website uses Google Analytics cookies to provide anonymised information such as which country you are visiting from and which pages you view. Cookie information is stored in your browser and performs functions such as recognising you when you return to our website and helping our team to understand which sections of the website you find most interesting and useful.

Strictly Necessary Cookie should be enabled at all times so that we can save your preferences for cookie settings.

If you disable this cookie, we will not be able to save your preferences. This means that every time you visit this website you will need to enable or disable cookies again.