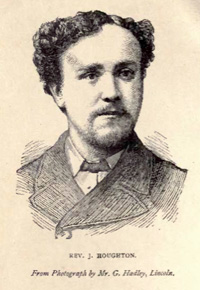 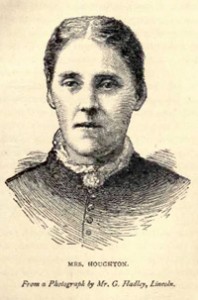 Robert Brewin wrote an account of John and Annie’s lives (and deaths) in his book “The Martyrs of Golbanti, or Missionary heroism Illustrated in the lives of Rev. John and Mrs Houghton, of East Africa”. It is thought to have been published in 1886 and can be downloaded in various formats from Openlibrary.org. This book provides details of John and Annie’s early years in Lancashire and their experiences in East Africa, along with excerpts of journal entries and letters sent home to family and friends. The key events from John’s life that can be gleaned from this book are:

1868-9 – At the age of eleven, he and his mother moved to Denton where he worked at a hat manufacturers.

August 1873 – Converted to God at the age of fifteen and a half and joined the church at Denton.

1879 – John offered his services to the Connexional Committee of the United Methodist Free Churches for home or foreign work. He was accepted and entered a two-year course of college training at the Theological Institute, Crescent Range, Manchester.

1881 – John was appointed to the Bramley Methodist Circuit (near Leeds, West Yorkshire) and was resident in Kirkstall.

August 1883 – Moved to the Saxon Street Church at Lincoln.

1883/4 – Responded to an appeal for missionaries in the Galla region (East Africa).

4 Sep 1884 – Married Annie BROWN at Denton. Annie had previously worked as a fore-mistress at the hat manufacturing company jointly owned by her brother William (it was at the factory that the two met).

22 Oct 1884 – John and Annie departed from London on the S.S. Kerbela, headed for Mombassa via Gibraltar and Aden.

28 Nov 1884 – Arrived at Mombassa and stayed at Jomvu (12 miles from Mombassa) with Mr and Mrs Wakefield for 5 months.

April 1885 – The Houghtons volunteer to take charge of the mission station at Ribe, eight miles inland from Jomvu.

24 Feb 1886 – Their first encounter with Masai warriors, who burned down a number of local natives’ (Gallas) huts and took away their cattle, killing a number of Gallas and five of the mission staff.

3 May 1886 – The Masai return and raid the mission at Golbanti, killing John and Annie along with many Gallas, before plundering the mission for anything of value.

Although the early chapters of this book provide details of John’s earlier years in Lancashire, the emphasis is mainly on his religious training and there is no mention of his father and only occasional reference to his mother. This is in contrast to the information given for Annie BROWN, the girl who John married in 1884; she is described as the youngest daughter of John BROWN of Shaw Heath. I suspect that this might indicate that John was born illegitimate.

The dates for John’s birth (26 Mar 1858) and marriage (4 Sep 1884) are mentioned in the above book, giving me the information I needed to order a copy of his marriage certificate, which gives the following information:

John was 28 years of age and a United Methodist Minister – there is no entry for his father. Annie was 32 years old and her father was John BROWN (deceased), a licensed victualler. The witnesses were William BROWN and Mary BROWN.

I have searched for a John HOUGHTON born in Shevington in the censuses with the following results:

The above census information appears to confirm my suspicion that John was illegitimate.

I have traced John’s grandfather and family back through the earlier censuses:

The Manchester Times printed a report on the tragedy in their foreign news section on Saturday, May 29, 1886 (issue 1507), which I have reproduced below:

One Reply to “Rev. John Houghton”

You can find out more about which cookies we are using or switch them off in settings.

This website uses Google Analytics cookies to provide anonymised information such as which country you are visiting from and which pages you view. Cookie information is stored in your browser and performs functions such as recognising you when you return to our website and helping our team to understand which sections of the website you find most interesting and useful.

Strictly Necessary Cookie should be enabled at all times so that we can save your preferences for cookie settings.

If you disable this cookie, we will not be able to save your preferences. This means that every time you visit this website you will need to enable or disable cookies again.