Below is a transcript from the Runcorn Guardian of 10th February 1892 (kindly sent to me by Howard Peacock):

S HOUGHTON OF RUNCORN. SKETCH OF HIS CAREER

“This player, who has deservedly gained international and county honours, called forth the following notice and complimentary remarks in the football edition of a Liverpool contemporary, on Saturday evening: Born in the year 1871 he can only be said to have just reached the age of manhood – budding manhood if we may say so, judging by the shadowy streak of “down” which gracefully embellishes his upper lip; a moustache in embryo, as it were, which, no doubt, Houghton greatly cherishes and encourages. Our friend first saw the “light of day”, or as some people will have it, first commenced his troubles, in the salubrious town of Runcorn, so that he has got, what a good many county representatives boast of, a “birth qualification” for Cheshire. Judging from his powerful build and appearance, Houghton must have been a sturdy kicker in his infancy; but the earliest record we have of his attainments in this respect was when he was thirteen years old. At that age he was a member of the St John’s Juniors, a small local club, for which he played full back. From the Saints, he graduated to the Halton, then on to the Runcorn Recreation, so that in a brief season or two he had developed into one of the most promising young Ruby players in the district. It was while connected with the “Recs.” that Houghton first attracted the attention of the premier Runcorn club, by whom his services were secured to play full back for their “A” team – the nursery of the “Cheshire champions”. A season’s coaching was all that was necessary to make him a worthy successor to A W. Brazendale, who, it will be recollected, was at one time the ablest full back Cheshire county possessed. Houghton made his debut in the first team ranks of the famous Runcorn club against Birkenhead Park – their greatest rivals in the county – two seasons back, when he won bright opinions from the critics, and the quidnuncs predicted rightly that he was the “coming player”. Last season he first donned the Cheshire colours against the Midland Counties, though, if we recollect right, he refused the honour of wearing the jersey in a previous match. From that date, however, Houghton has taken part in all the Cheshire County fixtures. His meritorious performances in these engagements won for him the admiration of the Rugby world, and when the North Committee were called upon to select a team to oppose the South, Houghton’s claims could not be passed over. In this encounter, he added fresh bays to his laurels as a county man, and his play gave such satisfaction that it was said the young Runcornian would soon reach the top rung of the ladder in the Rugby field. It caused some disappointment to his club and county that he was not selected for the international match against Wales on January 2nd. But it was felt certain that his time would come before the present season closed. Those expectations have been verified, for today he figures on the England side against Ireland, and we shall be a little surprised if he is not chosen to do duty against Scotland later on, which is the most important of the three international games played.
As a player, Houghton is most unassuming. No matter how hard pressed, his temper always remains unruffled – a splendid characteristic in a football player and his face throughout the game is wreathed in a broad, beaming smile of contentment and satisfaction, which ensures confidence to his colleagues, as well as those who are watching at the ring side. Houghton’s play as full back is so well known in this part of the country, and the North generally, that it requires no recommendation from us. We shall, however, be making no exaggerated statement by saying that he has not a superior at the present day in the country as a Rugby full back.”

For the record, England played Ireland at Whalley Range (Manchester) on the 6th February 1892, where England beat Ireland by 7-0 . Sam also played full back for England in their match against Wales on the 4th January 1896, where England won 25-0.

Below is a team photo of the Cheshire players taken in 1892 prior to their match against Lancashire (thanks to Howard Peacock for providing me with a copy of this photo). 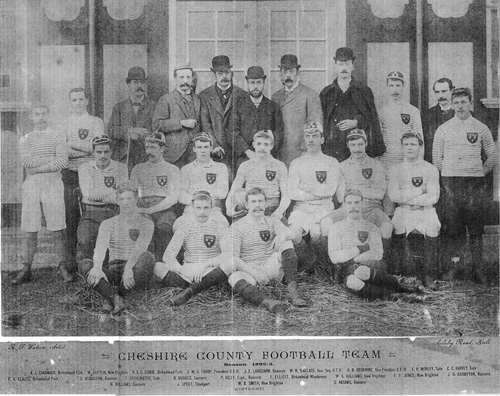 Aside from his football achievements, his obituary mentions that Sam was the licensee of the Egerton Arms in Bridge St, Runcorn and that he had previously served as a ship’s carpenter. He was also an enthusiast of bowling and had recently taken up motoring. That he also had a wife and family is mentioned in passing.

I am indebted to Steve Jones for providing me with the transcription of the headstone for Samuel and his family at Runcorn cemetery (the grave is located in plot 12, grave number 262): 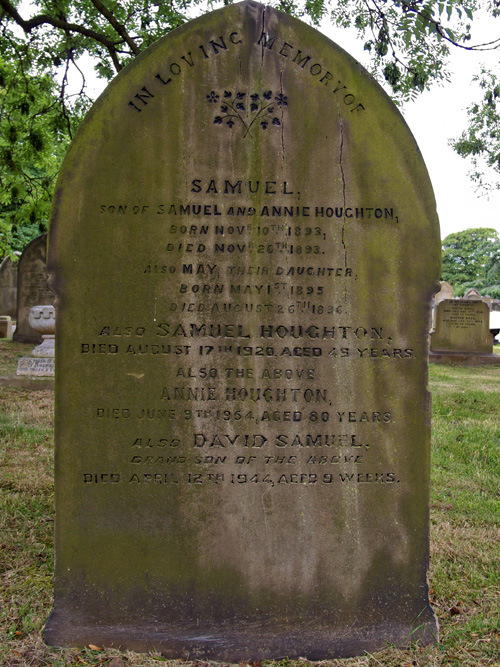 In Loving memory of

Son of Samuel and Annie Houghton

Also MAY, their daughter

Sam’s obituary, as printed in the Runcorn Weekly News on the 20th August 1920, is reproduced below – click the thumbnail for full size version. (My thanks to Howard Peacock for the cutting): 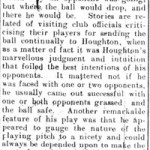 The Widnes Weekly News printed the following notice on 27 August 1920:

On the 21 January 1921, they printed this in memoriam notice:

I’ve tried to build up a picture of the family through the snapshots provided by the censuses, although the picture does become somewhat fuzzy the further back I looked. Everything seems consistent until we get to 1871, where Joseph is suddenly 20 years older than he should be and is married to Sarah, not Eliza. Parents aside, the children do appear to be consistent:

Searching Cheshire BMD, there is a record of a Samuel HOUGHTON marrying an Annie WARBURTON In Runcorn in 1893.

Next door at No.8 Hartley St are Joseph and Mary WARBURTON, with their 17 year old daughter Annie.

Again, the WARBURTON family are living next door.

More insight into Sam’s extended family comes from this obituary printed in the Widnes Weekly News on 28 June 1918:

“Mrs STUBBS of 4 Hill Cottages, Higher Runcorn, has received word that her brother, Private William HOUGHTON has been killed in France during, it is surmised, one of the German air-raids on British hospitals. He was the son of Mr and Mrs Joseph Henry HOUGHTON of Irwell Lane, Runcorn, and was 38 years of age. He emigrated to Canada some 7 years ago and joined the 36th battalion of Canadian forces in January 1915.  He susbequently participated in several attacks and was wounded 3 times. After spending some months in hospitals in England, he was transferred to the RAMC and met his death while serving in this capacity. He leaves a wife, who at the moment she received the notification of her husband’s death, was expecting word that he was coming home on leave. He had 3 children. Private HOUGHTON is a nephew of Sam HOUGHTON the well known Runcorn Northern Union player.”

I searched on The Commonwealth War Graves Commission website and found a record for William which is reproduced below:

Below are two census records for what appears to be William and his parents:

If you know of any other biographical information that could be included on this page (it would great to know more about Sam’s non-sporting life or get hold of a photo of him) or you have details of or are related in some way to members of his family (I’d particulary like to follow up on his nephew William who emigrated to Canada ~ 1911), then please get in touch.