Photograph of Elizabeth taken outside her home at 365 Warrington Road, Widnes. This is the only photo of her that we have

Who was Elizabeth Mary CUMMINGS?

When she married my great-grandfather Samuel HOUGHTON in April 1895, Elizabeth Mary CUMMINGS was a 20 year old spinster and she gave her father’s name as George CUMMINGS (labourer). The witnesses were James MARTEN and Isabella CUMMINGS. Her age corresponds with that in the 1901 census (25), in which her place of birth was given as Liverpool. After a lot of searching, however, I had been unable to find any record of the birth of an Elizabeth Mary CUMMINGS on or around 1875 so dropped this line of enquiry to pursue other ancestors. The breakthrough came in collaboration with a couple of contacts I later made through the GenesReunited website.

The first was John MADDOCK, whose g-grandfather Henry MADDOCK was married to an Agnes CUMMINGS. John discovered references to my Houghtons in documents relating to Henry’s death. Amongst the mourners at Henry’s funeral were my g-grandfather Samuel HOUGHTON, listed as being his nephew and my grandfather, Samuel Henry HOUGHTON and his sister Phyllis HOUGHTON who were said to be his grandchildren. The informant on Henry’s death certificate was Elizabeth HOUGHTON, niece, of 26 Foster St, Widnes. He also knew from Agnes’ marriage certificate that her father was a baker called Andrew CUMMINGS. John subsequently found Andrew in the 1871 census, one of 219 prisoners in the main Bridewell on Dale Street, Liverpool.

Lynn RUSSELL, who is related to me through my grandfather’s sister Ivy, had also been researching her HOUGHTON line and she joined the search finding what we believe to be Elizabeth’s birth certificate under the name BOYLE. The certificate details are:

In the 1881 census, Henry and Agnes were living with their 6 year old niece, Elizabeth BOYL, born in Liverpool:

In 1891, Henry and Agnes now have a 16 year old Elizabeth MADDOCK (born in Liverpool) living with them as their daughter:

* We believe that these are the same person; i.e. our Elizabeth Mary BOYLE.

Further confirmation of a link between the HOUGHTON and MADDOCK families comes from the observation that on her marriage certificate in 1928, Ivy HOUGHTON gave her address as 26 Foster St, the same as that given by Elizabeth HOUGHTON on Henry MADDOCK’s death certificate in 1926. [Other addresses in Widnes have also accommodated both MADDOCKs and HOUGHTONs; e.g. 12 Cliffe St – Jessie HOUGHTON was born there in 1900 and Henry & Agnes MADDOCK lived there with son John in 1901; 6 Foster St – Phyllis and Ivy HOUGHTON were born there (1904 and 1908 respectively) and John MADDOCK gave the same address on his marriage certificate in 1914].

We then started to search the censuses for CUMMINGS (and various similar spellings) to try and see if we can build up a picture of the family over the decades:

As we know, Andrew was in Dale St bridewell on the day of the 1871 census so where were the rest of the family?

There is an Elizabeth CUMMINS in Toxteth workhouse who could be our Elizabeth:

Andrew’s daughter Elizabeth could be with her younger brother in Blair St, Toxteth (they are the only persons listed in the household):

There is an Ann CUMMINGS working as a domestic servant in Birkenhead:

In 1881, Ann BOYLE is boarding with a George THRELFALL, along with her daughter Agnes, while her father Andrew CUMMINGS is reunited with his wife in Bootle:

In 1891, Andrew and Elizabeth are still together and are now living in Seaforth, with their son Andrew and his wife Catherine:

Elizabeth died before the 1901 census as Andrew is now a widower:

In addition to the above:

– Elizabeth BOYL/MADDOCK gave birth to John MADDOCK in Whiston Workhouse (1892). There is no father on the birth certificate. In the following census, John MADDOCK is living with Agnes and Henry MADDOCK as their son.

– In 1891, Ann J THRELFALL is a widow, boarding with her daughters Georgina (age 9) and Winifred (age 2). Georgina’s birth certificate confirms that her father is George THRELFALL and her mother is Ann J THRELFALL, formerly CUMMINGS.

– The 1901 census has Georgina THRELFALL as the granddaughter of Andrew CUMMINS (age 74) in Seaforth. His daughter Elizabeth McINTOSH (a widow, age 44) is there also. Living next door is Andrew’s son and his family.

Do we know the answer to the original question, who was Elizabeth Mary CUMMINGS?

* She was the daughter of Ann Jane CUMMINGS and George BOYLE. Her birth certificate (above) gives her name as Elizabeth Mary BOYLE and that her mother was Ann Jane BOYLE, formerly CUMMINGS but we have no evidence that Ann and George were ever married.

* In 1881, we think that she was the Elizabeth BOYL, staying with Agnes and Henry MADDOCK as their niece.

* In the 1891 census she appears to be Elizabeth MADDOCK, Agnes and Henry MADDOCK’s daughter.

* A year later Elizabeth MADDOCK has an illegitimate son, John MADDOCK. (In the 1901 census, it seems that John is being raised as Agnes and Henry’s son).

* In 1895, as Elizabeth Mary CUMMINGS, she marries Samuel HOUGHTON.

* Elizabeth & Samuel have ten children; Elizabeth Mary HOUGHTON dies in 1944 at the age of 69.

The best theory that we can come up with that fits the above evidence is that Ann Jane CUMMINGS and George BOYLE had a daughter, Elizabeth Mary, but they don’t actually marry (explaining why we haven’t been able to find a marriage certificate). George disappears off the scene and Elizabeth goes to live with her mother’s sister Agnes and her husband Henry MADDOCK, where they call her their niece (1871 census) and then later their daughter (1881 census), when she is known as Elizabeth MADDOCK. Meanwhile, her mother Ann, with daughter Agnes A., boards with and then marries George THRELFALL. Elizabeth later has an illegitimate son, John, who is also brought up by Agnes and Henry MADDOCK as their son. When she marries Samuel HOUGHTON, Elizabeth uses her mother’s maiden name CUMMINGS.

Considerable effort (not just on my part) has gone into trying to find out who George BOYLE was and why he disappeared off the scene. In particular, where was he at the time of the 1881 census? I have dedicated a separate page detailing our efforts to identify George BOYLE.

We already know that Andrew and Elizabeth CUMMINGS and at least two of their children, Ann and Agnes, were born in Scotland (Agnes in Edinburgh) from the English censuses so it’s time to explore this side of the story.

Once again I would liken to thank Lynn, John, Pat and Liz for doing much of the hard detective work and providing me with details of the censuses and other documents they obtained.

This is the first clue we’ve had as to Andrew’s birthplace, although having said that, the actual census image was difficult to interpret and Swinton could equally be read as Lunton or Lanton.

We have Andrew’s marriage record which states that he was a Baker of Greenside Row and that he married Elizabeth LISTER, daughter of William LISTER, Shoemaker in Edinburgh in 1848.

Unfortunately, Andrew was not with his parents for the 1841 census and the likeliest candidate we could find was in Cockburnspath, which is some 20 km to the north of Dunse:

Going by his age in the censuses, Andrew would have been born around 1826/7 and the closest match we have found is the birth of an Andrew COMMON who is the son of William COMMON and Agnes JOHNSON, born March 8th and baptised March 25th 1827 in Swinton. The only other corroborating evidence that we have for William and Agnes being Andrew’s parents is that Andrew and Elizabeth’s children names appear to follow traditional naming conventions, i.e.

We have also found William, Agnes and their children in the Scottish censuses (1841 – 1871)

From various sources, we have discovered that:

William’s father Andrew married Janet KER in 1795 in Swinton and before that he was married to Janet DODS in 1763.

Andrew had 5 children with Janet DODS:

Andrew and Janet’s sons, Andrew and Peter, are remembered in a Latin inscription on a gravestone in the Swinton parish church graveyard. The light was fading as I was trying to record it so to the best of my ability, the inscription reads: 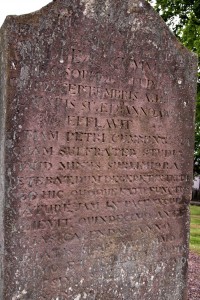 Which translates as (thank you Ed!):

Andrew had another son with Janet KER – Andrew, born in 1797. He married Isabellla JOHNSTON, the sister of his brother’s wife Agnes JOHNSTON in 1822. He was a hedger and forester and an Elder of the Free Church of Scotland. We have details of Andrew and Isabella’s children and to make things easier to follow I have prepared a chart (JPG image) that shows the relationships (click image for larger version).